AFTER taking classes in tents for the past 16 months, students and teachers of Mualevu District School in Lau are looking forward to moving back into their fully reconstructed classrooms.

School head teacher Lote Gucake says they are looking forward to putting the trials of Tropical Cyclone Winston firmly behind them.

Classroom blocks at the school are among the 35 buildings that are being rebuilt by the New Zealand Government and their contractors Pacific Building Solutions on Vanuabalavu. “The past 16 or so months have been challenging and rewarding,”said Mr Gucake.

“There were moments when we had to move furniture and books to a dry spot in the class tent to get out of the rain and cold winds during pressions post -Winston and Cyclone Zena last year. Then we had Cyclone Ella, which closed school earlier this year in Term 2. However, seeing children turn up to school with great enthusiasm to learn is rewarding enough”

Mr Gucake said the school had 85 students from years 1-8, while the school ECE facility had a roll of 30 pupils.

He said the school was badly damanged by the cyclone and initial damage costs were estimated at $375,000. 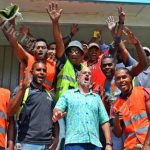 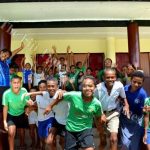