The construction of the new Rabi Island jetty is part of the Fiji government’s plan to provide an ideal opportunity for development on the island. The introduction of this vital piece of infrastructure would rapidly progress development to not only Rabi, but neighboring islands includilng Kioa as well as the adjacent coast of Vanua Levu.

PBS Managing Director Michael Fairfax said “It is a great opportunity to be part of a major development in the North that will greatly improve the economic standard of Rabi.

Design of the jetty commenced a few months ago led by Vijay Krishan and his team at Engineered Designs. With the design finalised and an Environmental Impact Assessment Report in place and approved the work commenced, as planned, on Monday 12th December after we mobilised plant, materials and people on the island. The jetty and causeway is scheduled to be completed in April 2012”, he said.

Through this infrastructure development, the government is committed to integrate the traditional rural subsistence livelihood into the mainstream commercial and entrepreneurial environment.

Dr. Bauro Vanualailai, the Chairman of the Rabi Council of Leaders, comments “PBS was awarded the tender based on its many professional accreditations and performance, in particular the impeccable record it has shown through most of its unique engineering and construction designs.

Its completion rate of successful projects has proven it to be one of the leading design and build construction  companies in the region,” he said.

Vanualailai said the new jetty will cater for more maritime traffic which is hoped to result in an increase in the frequency of shipping schedules and reduce travel expenses for locals.

This is one of the first major developments in remote Fiji, being a major channel for opening up the constricted economic nature of such a remote island environment. 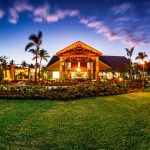 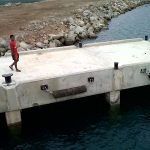