Transportation will no longer be a problem for the Banaban people on Rabi as they have finally received three new buses from the Rabi Council of Leaders.

Rabi council executive director Marlie Rota said the new buses had become a great help to the people as they were finding difficulty in travelling by trucks and old buses. “The people have been travelling in a three-tonne and five-tonne trucks and an old bus that was always breaking down and this made it difficult for the people and even the children to travel.” Ms Rota said

The second-hand buses, from Japan, had been purchased by the Rabi Council and were brought to the island in time for the Rabi Festival on December 17.

Ms Rota said transportation was one of the priority issues that were raised by the members and the decision was all made by all members.

“We had an amending meeting to purchase the second-hand buses and the members were very supportive in helping our people.” Ms Rota said
Meanwhile, island producers will no longer endure boat rides from Rabi to Karoko in Tunuloa, after Pacific Building Solutions (PBS) was awarded the design and building contract, worth around $3 million, to construct the new Rabi Island jetty. The design of the jetty had begun a few months ago and was scheduled to be completed in April 2012. This was part of the Government’s plan for development on the island. 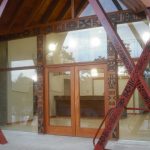