The first half of the new departures check-in terminal at the Nadi International Airport will soon be open to the public after the completion of the final upgrade by August this year.

Attorney-General and Minister for Civil Aviation Aiyaz Sayed Khaiyum toured the departures check-in terminal recently to get an update on the final stages involved in the construction.

“This site is a live site and the airport has to manage people coming in and out and also manage the traffic flow. The departures check-in has made a lot of progress and the first half of the departure area should be open within three months,” the A-G said.

Upgrade work will also start on the second half of the departure area.

“We don’t have the skills set available in Fiji, there is a Samoan company that is doing tiling in Fiji. We are in a competitive market; your airport is the gateway to any country and your departure makes the first impression or the worst expression,” the A-G said.

Mr Sayed Khaiyum said the infrastructure itself when upgraded will have a Fijian experience with modern facilities for our visitors. 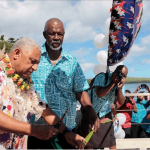 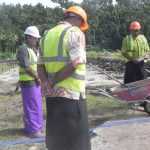