Look Out! Top 10 Developments To Keep An Eye On

Expect a lot of developments opening or continuing in a big way this year.
Our first edition of the year, brings you a quick brief on the TOP 10 significant multi-million dollar developments that are to open, to start and those that are to be revived again.
The significance of these developments are not alone just because of its magnitude but because of the fact that their very existence contributes to our economy.

Meaning
It means, be it direct or indirect, these developments enable breadwinners to put food on the table for their families.
It means it sends our children to school, opens up small and micro enterprises, and in all essence, churns the economy.

Innovation
It means innovation and technological ideas are being introduced to Fiji which puts our nation at the centre and the true hub of the South Pacific.
It means that this money goes towards our revenue coffers and this can be generated for more Government development expenditure, on infrastructure and others.

It means that from the construction sector to the airline industry, somebody is exchanging money, a bank account is for the first time being opened, a person’s superannuation fund accumulates and so much more.

It means, without getting into an economist’s jargon arena, or the accountants complex calculations to get a balance sheet, this is how the economy works.

Sun Business lists down some of these developments you should put on your alert radar.

By July end the International Departure area on the first floor would be open.

Airports Fiji Limited said the delays in this stage was felt by the contractors. New Zealand’s Hawkins Infrastructure and Pacific Building Solutions.

However, the time frame and that concessioners and tenant will be given 10 weeks to do fit outs.

By July end the International Departure area on the first floor would be open.

Government estimates this project alone will add more than two per cent to our Gross Domestic Product in the next two years.

The Momi Bay project that came to a halt seven years ago – effectively killed off by foreign mismanagement – has been resuscitated and stages of foreign development will commence proper this year.

Government estimates this project alone will add more than two per cent to our Gross Domestic Product in the next two years.

No. 3: The Pearl South Pacific Resort & Spa at pacific harbour

Progress on the much-awaited The Pearl South Pacific Resort project is on track as the Papua New Guinea owners anticipate the project’s completion and entire opening this August.

The Pearl Resort is said to highlight the potential of the country’s adventure capital creating 190 additional jobs with new state-of-the-art facilities undergoing three phases of construction/building.

The company is now one of PNG’s leading corporate entities and is the single biggest custodian of the landowners’ wealth from the natural resources.

The resort is destined to revive the former glories of Fiji’s adventure capital and more.

The facility will comprise of a dedicated berth for vessels of up to 60,000 metric tonnes capacity, a barge unloading facility, washing plant, enclosed stockpile shed, ship loading infrastructure, workshops and offices.

Amex said work were supposed to have started in the past year but the delay was due to its contractor restructuring funding obligation which now stands at $153 million.

The entire construction contraction for Mba Delta Ironsands is for US$100 million or FJ$198.77 million.

Two Chinese state-owned groups will carry out the works during an 18-month construction term.

Port Fantasy commercial and industrial marina complex final plans have been approved for building. Construction of the common user terminal – designed to be Fiji’s finest – will start this year.

The Port Fantasy Marina on Nadi Bay will be an exciting addition to the Fijian tourism infrastructure . It will provide much needed extra space for the tourism transfer fleet operating to the Mamanuca and Yasawa islands.

Planned completion of the Terminal is earmarked this year with leases for the tourism spaces on the ground floor to be made available later in the year.

Though a smaller investment compared to what we’ve listed, the fact of the matter is it’s opening mean a lot to the tourism representatives and employers.

The Fiji Commerce & Employers Federation and the Fiji Hotel & Tourism Association $2 million building currently in construction on its old property site on Gorrie Street is set to open this year.

The two bodies had been sharing the same office space since 1992 on 42 Gorrie Street in Suva will now co-own a modern building that will help boost the bodies’ services, aims and mission.

The contract was given to Jenns Construction and Bank South Pacific was selected the financier of the project.

The construction of the 120-metre high Grand Fijian will be a monument of national pride, says project design principal and owners Sharma Design Group Limited. It will boast two types of accommodation, that is, hotel and apartment convenience. Upon completion, the brand will be managed by a corporate body known as The Grand Hotel & Spa Limited.

Malolo Island, is no stranger to development. The island houses a number of resorts including Likuliku and Malolo.

Now what started as a journey to find a perfect holiday home for a New Zealand family will soon turn into a $300 million investment between five friends.

The investment is for luxurious island residences and a boutique hotel called Island Grace.

The small group of friends from New Zealand and America have worked at a remarkable pace to see earthworks of 500,000 square-metre construction of an initial 5 residences and the 5-star boutique hotel to take shape.

Project is being financed through owner equity and a development loan from the Fiji Development Bank secured against presales.

The local community receive would 10 per cent of all land sales and has a 21 per cent stake in any body corporate profits.

SUN Insurance is due to commence works on its $15 million LHM Architects-designed property construction in Nadi early this year.

This seven-storey building will be for mixed use and will be literally five minutes walk from the Nadi International Airport.

It will consist of high end office block with potentially serviced apartments for the business travellers.

Its proximity to the Airport makes it ideal for Suva-based head offices wishing to set up a branch office in Nadi, the developers say.

Executives travelling for the day from Suva need not get stuck in the rush hour Nadi traffic whilst returning for the flight back to Suva.

The decision to invest was to diversify the insurance company’s portfolio added with a desire to elevate its presence in the Western Division.

No. 10: Berry road apartments in Suva

While this is another smaller
development it illustrates the fact that Suva is becoming an apartment hub.

A $9 million 12-apartment complex is in the making on Berry Road in Suva.

The Berry Road Apartment is a four-storey building, on freehold land. It is owned by the Tappoo Group of
Companies’ property investment
arm-Bright Star Investment Ltd.

The complex will be owned through strata titles. Strata ownerships are common in developed countries closer to home, Australia and New Zealand.

And Suva, being the capital and
commercial hub provides excellent potential not only from the expatriates but local interests as well. 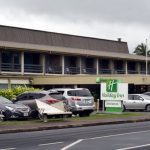