AIRPORTS Fiji Ltd is a few weeks away from opening the new departure lounge on the first floor at the Nadi International Airport. AFL executive chairman Faiz Khan said hoardings in one section of the lounge was opened allowing departing passengers to get a glimpse of what they could expect when the first floor was in operation.

“At present the contractor is putting final touches to completion and defect rectification process,” Mr Khan said. “In theory we can open the departures lounge to the public straight away and continue with the pending works during off peak operational times. “However, we want to give the passengers and all Fijians a wow factor experience when we open.”

Mr Khan explained AFL wanted to ensure that every aspect of construction work was completed before the departure lounge was opened. “Accordingly, putting the final touches and rectifying defects prior to opening is very important to both AFL and the contractor.” The $105million terminal modernisation project is expected to be completed by mid-2016.

Once completed, the airport will boast a modern check in terminal with a seven metre high ceiling and an extension to the entrance of the terminal enabling improved passenger flow management.
The tender contract for the multi-million dollar project was awarded to New Zealand-based Hawkins Infrastructure in partnership with Pacific Building Solutions. 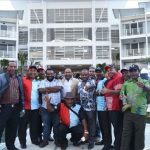 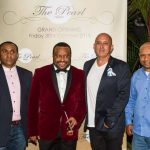