PARTS of Vanuabalavu in the Lau Group are being restored to their pre-TC Winston grandeur, thanks to a $10 million investment from the New Zealand Government.

As part of their assistance, the New Zealand Government has engaged local company Pacific Building Solutions to design, construct and repair buildings at Lomaloma, Mualevu, Daliconi and Cikobia.

When The Fiji Times visited the island on Wednesday, school buildings at Adi Maopa Junior Secondary School were well on their way to being completed, a far cry from the desolate structures left behind by Severe TC Winston in February last year.

New Zealand High Commissioner Mark Ramsden, who visited construction sites on Vanuabalavu, said they were asked by the Fiji Government to focus on public building in Northern Lau, Vanuabalavu and Cikobia.

“So the result of that was the project that included 35 public buildings, six schools including the ones we have been to today, Mualevu and Adi Maopa plus a range of other things like health clinics, public officer housing, police housing, health sector housing, a new Met Service office and house.

“So we packaged those together into a single big contract and went out to market for that and I’m really happy that PBS, a Fiji company, won that contract and they have been working very very hard and as you see today there has been a huge amount of progress, things like Adi Maopa High School are nearly finished, Mualevu school is nearly finished.

“So they are aiming to finish around mid-November we hope and we are really happy to see that work done.”

Mr Ramsden said the work being completed was admirable given the logistical challenges faced by working in remote areas like Vanuabalavu. 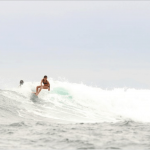